Systemic fungicides are also used against the next form of fungi that can attack certain conifers; the big 'C'!! Canker.. (also referred to as Cypress Canker). Canker is an airborne form of fungi that can enter a tree through an open wound or broken bough. It is more likely to manifest itself in a plant that has been placed in a stressful environment. It is more likely to effect the Cypress and Cupressocyparis species of conifer than others. 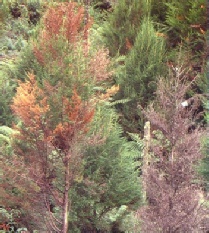 The symptoms usually include:

• A bough dying off (or part thereof).
• The whole side of a tree dying off.
• In severe cases the whole tree dies rather quickly.
• The oozing of sap or gum from the more woody parts of the tree.

Although foliage spraying may be effective, canker is usually treated by injecting the solution into the tree trunk. This is achieved using a specialised slow releasing injecting gun. These kits can be purchased from certain Produce Stores. Sometimes it may be more prudent to get a professional in to do the job.

Usually in the containment of canker in conifers, affected boughs are removed and the wound sealed with a special wound sealing compound. This is done in conjunction with the spraying or injecting of the systemic fungicide.